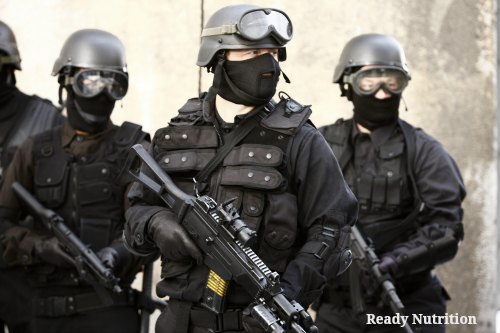 In one of my previous articles, I referenced several resources for you to use, and I will repeat them here.  The Field Manual for the Infantry Rifle Platoon and Squad, FM 7-8 is the manual I used when I was in the service.  (The “modern” version is FM 3-21).  Another reference is SH 21-76, the Army Ranger Handbook.  These three little books war a “gold mine” of information that you will need to organize yourselves (family, extended family-friends, and allies) into a cohesive force.  Notice how I did not say “effective,” and that adjective can only be obtained by practice and repetition.  It costs to become an effective fighting force.

That being mentioned, why am I writing about this?  Why write about such “military matters” as combat operations?

Because after the SHTF, the Army isn’t going to be sent in to do the “dirty work” for you while you dehydrate organic tomatoes: you’re going to have to do it yourself.

“Citizen-soldier” is a unique concept that perhaps is brought to the forefront of the imagination with the citizen-soldiers of the Revolutionary War…but its roots are much older than our transposed, Northern European form of society, culture, and government.  It has its roots in much older nations, such as the ancient city-states of Greece, and the Republic (then Empire) of Rome.

Citizens were not “encouraged” to serve: they were expected to be soldiers.

Fast-forward to now.  You can do the same: for your family, for your neighborhood, and for your community.  After it hits the fan, you may have to fight any number of enemies: marauding gangs, outlaws, foreign troops, and perhaps even those of your own government gone bad.

7 Tactical Topics You Must Master Before it Hits the Fan

You have a lot of studying to do that is beyond the scope of this article to cover, but we’re going to list some topics for you, and I will cover some of them later.  These topics are not merely subjects.  They are tasks, to learn how to do and execute as an individual and as a group.  Let’s list some:

Traveling formations: File, Wedge, Diamond.
React to near ambush.
React to far ambush (sniper fire)
Setting up an ambush (L, V, and so on)
Fixing and Flanking (with an “A” team/squad as base and the “B” team as flanking element) This calls for a “lift and shift” of fires on an enemy.
Strategic withdrawal/Orderly retreat
Setting up a cigar-shaped perimeter at night, with security

My best advice for you to train your group: LINK UP WITH A VETERAN – AN EXPERIENCED ONE. A veteran will be your best bet for being able to bring all these tasks to bear and train to standards.

You also need to follow a doctrine, and that is one of Fabian Tactics.  What are they?  Well, Fabian Tactics are also referred to as “hit and run” tactics, and are usually thought of as “guerilla,” or unconventional warfare tactics.  They can be employed as such, and usually are; however, they are also used by conventional forces when arrayed against a much larger force.

The effects of these “hit and run” tactics are not to achieve an out-and-out victory, but to delay, to harass, and to dissuade a superior force from entering into an area and conducting regular combat operations that eventually lead to taking the ground and pacifying the resistance.

The term originated with the former Consul of Rome, Quintus Fabius Maximus, who utilized such “hit and run” tactics with the Roman legions when they fought the great Carthaginian General, Hannibal.  The measure was used successfully, in which the Romans wearied the men and forces of Hannibal and dragged out the conflict for so long that the battle in Italy was unsustainable.  It forced the Carthaginian withdrawal, and then later the Romans defeated them in North Africa.

Learn from experience.  Learn from those who did it before.  Read and study about the Viet Cong…how a third-world nation held out against the United States Military.  Do you want a good read?  Invest in “The Tunnels of Cu-Chi,” for an in-depth view of how the North Vietnamese Army and the Viet Cong were so successful.  Watch films on resistance…by the fighters in the Warsaw ghetto during World War II.  Do you want to know how to do it from the ground up?  Pick up the book and the film, both entitled “Defiance,” about the Bielski brothers in Belorussia during WWII…how they formed and trained an effective resistance force.

Start studying these things.  One by James Michener (and not a novel, but a documentary) is entitled “The Bridge at Andau,” where you can read about teenage girls that had the guts to blow up Soviet tanks during the Hungarian resistance.  Study, task organize, and train.  Above all, find yourself a vet and learn from them.

And treat the vet as a hero: as the vet should have been treated by the nation.  It may just be that the vet will end up being a hero again…in your service when the “S” hits the fan.

Fight that good fight, fight it well, and fight it smart.  Fight it to win.  JJ out!

Jeremiah Johnson is the Nom de plume of a retired Green Beret of the United States Army Special Forces (Airborne). Mr. Johnson was a Special Forces Medic, EMT and ACLS-certified, with comprehensive training in wilderness survival, rescue, and patient-extraction. He is a Certified Master Herbalist and a graduate of the Global College of Natural Medicine of Santa Ana, CA. A graduate of the U.S. Army’s survival course of SERE school (Survival Evasion Resistance Escape), Mr. Johnson also successfully completed the Montana Master Food Preserver Course for home-canning, smoking, and dehydrating foods.

Mr. Johnson dries and tinctures a wide variety of medicinal herbs taken by wild crafting and cultivation, in addition to preserving and canning his own food. An expert in land navigation, survival, mountaineering, and parachuting as trained by the United States Army, Mr. Johnson is an ardent advocate for preparedness, self-sufficiency, and long-term disaster sustainability for families. He and his wife survived Hurricane Katrina and its aftermath. Cross-trained as a Special Forces Engineer, he is an expert in supply, logistics, transport, and long-term storage of perishable materials, having incorporated many of these techniques plus some unique innovations in his own homestead.

Mr. Johnson brings practical, tested experience firmly rooted in formal education to his writings and to our team. He and his wife live in a cabin in the mountains of Western Montana with their three cats.