Ready Nutrition Guys and Gals, we’re going to discuss a flashlight that you’ll want to pick up. The Fenix TK-25 has some features that you will be able to use to your advantage whether out hunting and camping or in the midst of some disaster such as a hurricane or snowstorm. It can also be used for your defense: not as a club, but because of it’s powerful light output. 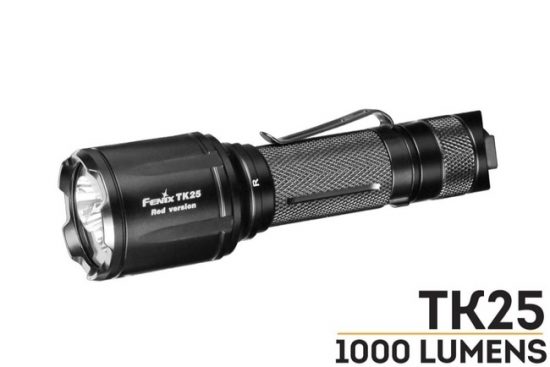 The TK-25 has Cree Technology white and red LEDs that have an estimated life of 50,000 hours. I’ve had mine for about three months, so you’ll have to give me some time to weigh in completely on that! Defensively, this light can be used to partially blind and disorient an attacker: it puts out 1,000 Lumens. Yeah! That’s a lot! If you had that on full-force, you could still run it for about 2 hours. The red light is good on full power for about 2 ½ hours. 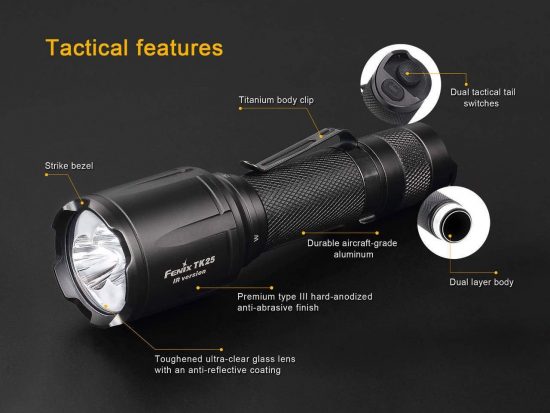 The power source is your choice of either (2) CR-123 A Lithium batteries, or a rechargeable 18650 Li-ion (Lithium Ion) battery. I opted for the latter, as it can be charged up in a battery charger and used again. The length of this flashlight is about 5 ½” long, and it has a clip on it that can be used on the brim of a hat, although the weight makes it a little cumbersome for a head-supported spotlight. I’ve found that you can wrap a headband around it for further support if need be.

It has a “strobe” feature for both the white and red lights, although the strobe is not continuous…it pulses about three or four times, and then you have to press the button again. The power level is adjustable, so you can take it down to just 15 Lumens for the white and 10 Lumens for the red at its lowest settings. Distance-wise, the beams are effective out to about 600 feet on either setting.

The flashlight comes with a limited lifetime warranty and five years of repair, free of charge. You can’t do much better than that. Batteries are sold separately, and the one I use (the Li-ion 18650) runs about $5.00 a set. Since it’s rechargeable, it’s cost-effective, and I have spares just in case. It comes with a carrying sheath that you can use on your belt, although my personal preference is to keep it in a shirt pocket with a flap that buttons. If you put it on a belt, be sure and “dummy cord” it with a length of 550-cord that’s been gutted and burned off on both ends, tied off to a belt-loop or such.

The Fenix TK-25 doesn’t carry a “bargain-basement” price, but it’s affordable: it will pay for itself when you need it from either a tactical or a disaster perspective. Keep in mind the time-tested saying in the vernacular: “Cheap you buy, cheap you get.” You need your tools and equipment to work, be able to take a beating, and not fail you. This flashlight satisfies all three of those requirements. The Fenix TK-25 is available for about $90, and you can order it (as well as batteries for it) right off the Internet at www.amazon.com and have them send it to you. Try it out, and you’ll be pleased with your investment.  JJ out!

Find out more information about this product at FenixLighting.com

Jeremiah Johnson is the Nom de plume of a retired Green Beret of the United States Army Special Forces (Airborne). Mr. Johnson was a Special Forces Medic, EMT and ACLS-certified, with comprehensive training in wilderness survival, rescue, and patient-extraction. He is a Certified Master Herbalist and a graduate of the Global College of Natural Medicine of Santa Ana, CA. A graduate of the U.S. Army’s survival course of SERE school (Survival Evasion Resistance Escape), Mr. Johnson also successfully completed the Montana Master Food Preserver Course for home-canning, smoking, and dehydrating foods.

Mr. Johnson dries and tinctures a wide variety of medicinal herbs taken by wild crafting and cultivation, in addition to preserving and canning his own food. An expert in land navigation, survival, mountaineering, and parachuting as trained by the United States Army, Mr. Johnson is an ardent advocate for preparedness, self-sufficiency, and long-term disaster sustainability for families. He and his wife survived Hurricane Katrina and its aftermath. Cross-trained as a Special Forces Engineer, he is an expert in supply, logistics, transport, and long-term storage of perishable materials, having incorporated many of these techniques plus some unique innovations in his own homestead.

Mr. Johnson brings practical, tested experience firmly rooted in formal education to his writings and to our team. He and his wife live in a cabin in the mountains of Western Montana with their three cats.