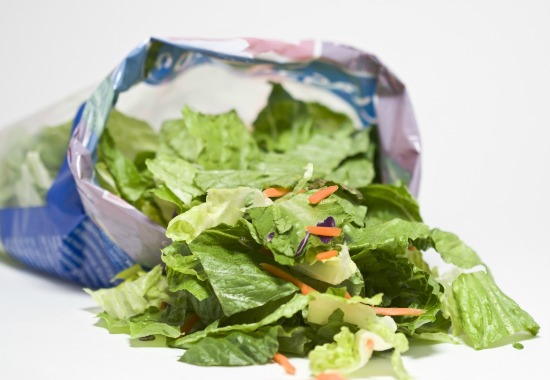 What’s with all the produce recalls lately? Recently, lettuce growers in California announced a major lettuce recall due to an E.coli outbreak. It seems food recalls are a news staple these days. In fact, the CDC estimates that 1 in 6 Americans gets sick from eating contaminated food every year. Raw foods of animal origin – including chicken, beef, dairy products, raw shellfish, and eggs – are the most likely to be contaminated. Sometimes, fruits and vegetables get contaminated as well. Food can get infected at any time, from the field to the kitchen.

Before we move on to discuss health concerns associated with bagged lettuce, let’s first talk about common foodborne diseases.

Researchers have identified more than 250 foodborne diseases, according to the CDC. The agency estimates that 48 million people get sick from a foodborne illness each year, 128,000 are hospitalized, and 3,000 die.

Most foodborne illnesses are infections caused by a variety of bacteria, viruses, and parasites. Harmful toxins and chemicals also can contaminate foods and cause foodborne disease. Sometimes natural toxins such as those in some mushrooms and molds are the cause.

Food poisoning symptoms may range from mild to severe and may differ depending on the germ you consumed.

The most common symptoms of food poisoning include:

Sometimes, food poisoning causes severe illness and can be life-threatening.

The CDC recommends seeing a healthcare provider if any of the following symptoms appear:

High fever (temperature over 101.5°F, measured orally)
Blood in stools
Frequent vomiting that prevents keeping liquids down (which can lead to dehydration)
Signs of dehydration, including a marked decrease in urination, a very dry mouth, and throat, or feeling dizzy when standing up.
Diarrhea that lasts more than 3 days

Despite the common belief that food poisoning strikes immediately after eating the offending food or drink, in some cases it can take hours or even days before symptoms appear.

For example, if you eat something contaminated with Staphylococcus aureus (Staph), you will likely know it within 30 minutes – 6 hours. But if you eat food infected with Listeria, you may not develop symptoms until 4 weeks after consumption! Symptoms of Hepatitis A infection can take up to 50 days to appear.

The CDC has a handy chart that lists each foodborne illness-causing organism in the US, the symptoms and the typical time it takes for them to appear, and the common food sources for each.

The top five offenders in the US are:

Some other organisms don’t cause as many illnesses – but when they do, the illnesses are more likely to lead to hospitalization.

There are things you can do to keep yourself and your family safe from food poisoning.  Foodsafety.gov recommends following four simple steps: Clean, Separate, Cook, and Chill.

It might seem hard to believe, but pre-bagged lettuce is one of the biggest food poisoning offenders. Leafy greens can become contaminated at any point during the growing and packaging process.

A recent multi-state outbreak of E. coli was linked to bagged romaine lettuce. During the outbreak, 210 cases were reported in 36 states. Five deaths were reported, and 96 people were hospitalized, including 27 people who developed a type of kidney failure called hemolytic uremic syndrome.

Researchers determined that the outbreak was caused by romaine lettuce from the Yuma growing region, according to the CDC:

CDC laboratory testing identified the outbreak strain of E. coli O157:H7 in canal water samples taken from the Yuma growing region. FDA is continuing to investigate the outbreak to learn more about how the E. coli bacteria could have entered the water and ways this water could have contaminated romaine lettuce.

According to the FDA, the last shipments of romaine lettuce from the Yuma growing region were harvested on April 16, 2018, and the harvest season has ended. Contaminated lettuce that made people sick in this outbreak should no longer be available.

Antibiotics are not usually given for E. coli infection, even though it is caused by bacteria. The reason? Some studies have shown that taking antibiotics for E. coli O157 infections might increase the risk of developing hemolytic uremic syndrome (a type of kidney failure). For most people, treatment consists of rest and proper hydration. Of course, if you suspect you have an E Coli infection, it is very important to see your healthcare provider for testing and treatment advice. In some people, the infection can become quite serious and can cause hemolytic uremic syndrome (even without antibiotic treatment). In these cases, hospitalization and supportive care including IV fluids, blood transfusions, and kidney dialysis are often necessary.

So, is buying bagged salad greens worth the risk?

A recent Examine.com report sought to answer that question.

According to the report, there are reasons for concern:

Outbreaks caused by leafy greens do happen a lot – they have been responsible for 22 percent of foodborne illnesses in the last 10 years
Because leafy greens grow so close to the ground, they are easily contaminated
There are many possible points of contamination, from farm workers to the factory
The infectious dose for E coli is very low – it doesn’t take much to cause contamination
The long-term impacts of food poisoning can be quite serious and include the risk of developing reactive arthritis and inflammatory bowel disease

There are other factors to consider. Some people are more at risk than others, including those with compromised immune systems, the elderly, children, and pregnant women. And, reactions to bacteria like E coli vary from person to person. It is possible that having a healthy gut microbiome might help the body deal with E coli better. There’s no way to know your gut will react, however, and as the report states, “… (ironically) eating a diet rich in leafy greens and other produce may help fortify your gut against gut inflammation, which can enable bacterial toxins to enter the bloodstream more easily.”

Here are some practical tips the Examine.com report suggests to help you reduce the risk of infection:

If you buy bagged leafy greens, use them before the use-by date on the package. This will limit the time any bacteria that may be lurking within will have to multiply.
Avoid buying sprouts. They are commonly contaminated and are “germ incubators” because they are grown in wet, warm conditions.
Remember – organic does not mean infection-free. A large study found 18 food outbreaks in organic food occurred within a 12-year period. “Back in 1996, juice from the organic company Odwalla was behind a big outbreak that made 66 people sick and killed a 16-month-old girl,” Examine warns.

The bottom line: Ask yourself  –  is the risk of infection worth the bit of convenience pre-washed and packaged salad greens offer?

If you’d rather not take the risk, buying un-bagged loose greens might be your best bet, or – better still,  grow your own or buy them from a local farmer. No matter where you get them from, be sure to wash your greens and avoid cross-contamination with other foods while you are storing and preparing them. 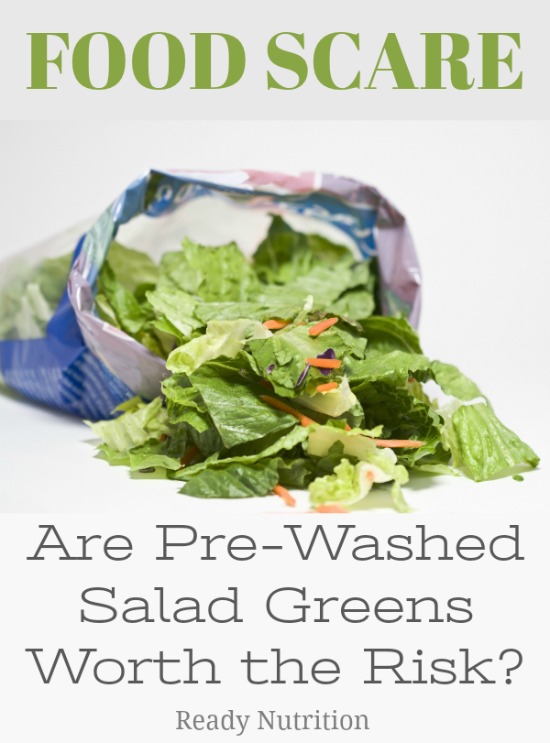