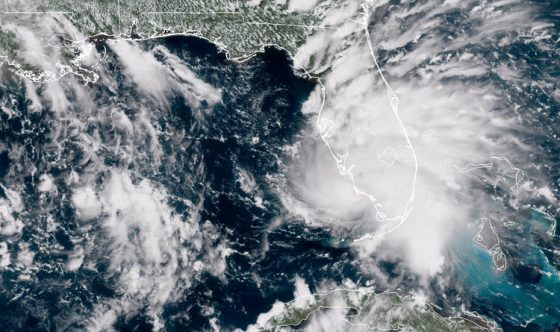 Although tropical storm Gordon was downgraded from being a hurricane, winds were still getting close 70 mph as it approached the Alabama/Mississippi border Tuesday.  Many preppers braced for the storm that would come, while others made jokes.

In this day and age where everything is politically charged and humans are clumped into “red” or “blue,” the comic relief Twitter provided was a breath of fresh air.

In case anyone is wondering, the area between New Orleans and Mobile is called Mississippi…

And many other people responded with how they plan to prepare for Tropical Storm Gordon.  Suggestions to stock up on booze were not limited and water appeared to be more readily available than beer.

The waters not sold out at the Walmart by my house but the beer is, I like yall’s style

I prepared for #HurricaneGordon by buying a 30 rack of high life, two bottles of champagne, a pot roast, boiled peanuts and a shit ton of candy

Others thought Oreos would be a better option than a hearty loaf of bread and some milk.

my mom asked me “did you buy milk and bread at the store?”I bought water and Oreos but I couldn’t imagine I would need anything else for the hurricane #HurricaneGordon

Yall pray for me, bout to hit up walmart to pick up supplies to make milk sandwiches #HurricaneGordon

But milk and bread weren’t the only things consumers bought up in hurry!  Many couldn’t stand to be without mayonnaise during the tropical storm.

I get people rushing out to stock up on bottle water and non-perishable food items when a hurricane is imminent, BUT MAYONNAISE?!?! Who sees a minimal hurricane coming and freaks out they might run low on mayo?#TropicalStormGordon #HurricaneGordon pic.twitter.com/38HRUrUcBv

Others pondered the idea of buying items with a longer shelf life than milk and bread too.

Why do people buy bread, milk, and eggs before a potential extended power outage? I'm headed to the peanut butter and candy bar aisle! #HurricaneGordon

The city of Biloxi, Mississippi, ordered its harbors and marinas evacuated, affecting about 300 vessels. Local political elitists were plainly trying to avoid promoting any widespread panic. “We’re asking people to do the same things that we’re doing: prepare,” Biloxi Mayor Andrew Gilich said in a statement. “There’s no reason to be alarmed. We’re being told to expect rain and wind, and we’re preparing accordingly. We expected our citizens to be doing the same.”

As many evacuated voluntarily and others were advised to do so, some made the most of the empty beaches and vacated cafes along the coast.

me: There was no traffic, beaches are empty, great breeze. Couldn’t have picked a better day.

Barista: Yeah a lot of people already evacuated due to the hurricane.

Others took the tropical storm a little more seriously and based on previous life events, it’s easy to see why that was the case.

It’s funny when people are all like “are you actually worried about #HurricaneGordon?” Like you’re crazy if you are. And you’re like “well no one was fucking worried about #hurricanekatrina and I ended up losing EVERYTHING in that one so, yes. Yes I am worried!”

Tropical storm Gordon did end up killing one person, a young boy when winds knocked down a tree onto a mobile home in West Pensacola, Florida.  No one else in the home was injured. After making landfall Tuesday night, Tropical Storm Gordon never reached Hurricane category one status.  By Wednesday morning, the storm’s winds were weakening. They were blowing at a maximum sustained speed of 40 miles an hour — 34 miles an hour below the meteorological threshold for a hurricane, the National Hurricane Center said, adding that the “threat of heavy rains and flooding continues.”

But weather appeared to be fairly nice for some in the path of the storm.

I should have added sunscreen to my hurricane preparedness list #HurricaneGordon